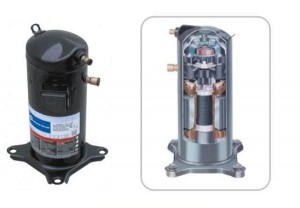 A scroll compressor (also called spiral compressor, scroll pump and scroll vacuum pump) is a device for compressing air or refrigerant. It is used in air conditioning equipment, as an automobile supercharger (where it is known as a scroll-type supercharger) and as a vacuum pump.

A scroll compressor operating in reverse is known as a scroll expander, and can be used to generate mechanical work from the expansion of a fluid, compressed air or gas. Many residential central heat pump and air conditioning systems and a few automotive air conditioning systems employ a scroll compressor instead of the more traditional rotary, reciprocating, and wobble-plate compressors.

A scroll compressor uses two interleaving scrolls to pump, compress or pressurize fluids such as liquids and gases. The vane geometry may be involute, Archimedean spiral, or hybrid curves.

Often, one of the scrolls is fixed, while the other orbits eccentrically without rotating, thereby trapping and pumping or compressing pockets of fluid between the scrolls. Another method for producing the compression motion is co-rotating the scrolls, in synchronous motion, but with offset centers of rotation. The relative motion is the same as if one were orbiting.

Another variation is with flexible (layflat) tubing where the archimedean spiral acts as a peristaltic pump, which operates on much the same principle as a toothpaste tube. They have casings filled with lubricant to prevent abrasion of the exterior of the pump tube and to aid in the dissipation of heat, and use reinforced tubes, often called ‘hoses’. This class of pump is often called a ‘hose pumper’. Since there are no moving parts in contact with the fluid, peristaltic pumps are inexpensive to manufacture. Their lack of valves, seals and glands makes them comparatively inexpensive to maintain, and the hose or tube is a low-cost maintenance item compared to other pump types. 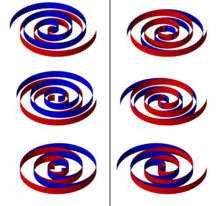